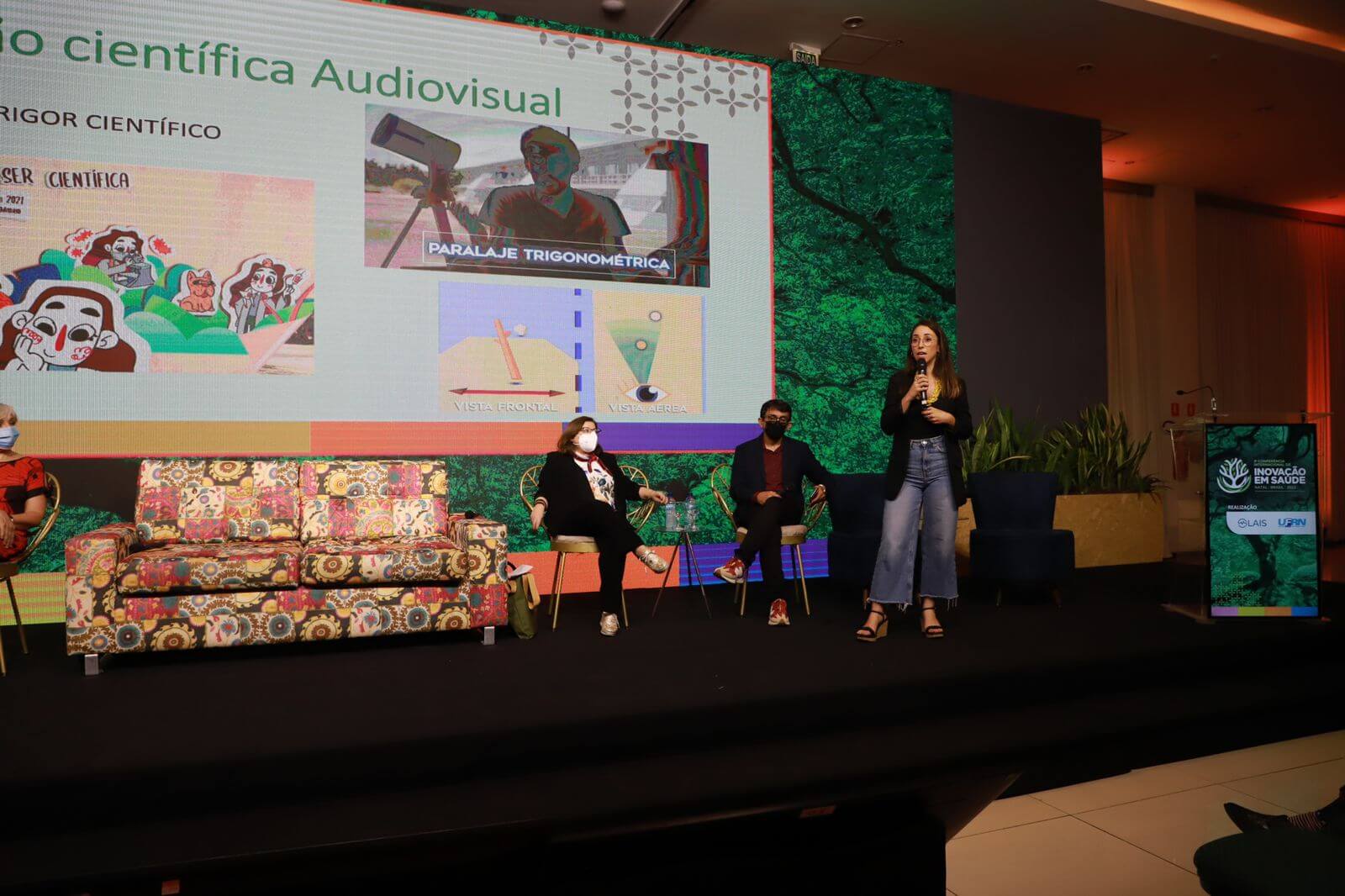 Brazilian, Spanish and Portuguese researchers, met this morning (6), at the Holiday Inn, to debate health communication during the panel discussion held at the 3rd International Conference on Innovation in Health (CIIS 2022). The place was characterized in shades of orange, in order to make reference to autumn, one of the four seasons of the year, through which the event passes during its four days, until next Thursday.

The panel “Health Communication” was mediated by Juciano Lacerda, vice-coordinator of the Post-graduate Program in Media Studies (PPgEM/UFRN) and researcher at the Innovation in Health Laboratory (LAIS/UFRN), and Almudena Muñoz Gallego, post-doctoral researcher at the Complutense University of Madrid and coordinator of the Research Support Center for Audiovisual and Digital Content for research and teaching (CAI CREAV).

Also participating in the debate were Isabel Duré, consultant of the Pan American Health Organization PAHO/WHO in the area of Human Resources for Health, Natália Ramos, professor at the Open University of Portugal, José Manuel Bautista, professor of Biochemistry and Molecular Biology and Coordinator of the COVID-ANTICIPA project at the Complutense University of Madrid (UCM), José Antonio Jimenez de las Heras, professor of the Faculty of Communication and Information Sciences (UCM/ Madrid) and director of CAI CREAV, and Regiane Regina Ribeiro, director of the Arts, Communication and Design Sector of the Federal University of Paraná (UFPR).

The PAHO representative highlighted the 20 years of the Virtual Public Health Campus (CVSP), which works as a system of technical cooperation between educational institutions for the training of health professionals. She also pointed out that the platform has over 1.7 million users and over 2.8 million enrollments worldwide.

In her speech, professor Natália Ramos, from UAb, talked about the global challenges for innovation, humanization, and intervention in health and pointed out that “the right to information and communication is inalienable from the right to health”. Then, Professor Juciano recalled the importance and efficiency of the communication carried out by LAIS, which has existed in an essential way since the beginning of the laboratory.

Throughout the panel, Almudena provoked discussions about possible ways for the audiovisual divulgation of scientific research results. She also presented the experience of the Complutense University, which is mostly done in audiovisual form, with the objective of making the language simpler and more accessible, but without losing scientific rigor. In addition, he ended his presentation talking about the partnership with LAIS, which aims to disseminate articles produced under the project “Syphilis No” in various platforms, such as video and podcast formats. The purpose of the project is to build a transmedia universe that reaches all the different audiences that make up society.

In his speech, José Manuel Bautista made a panorama of how communication is done in times of epidemics and pandemics throughout history, and talked about the evolution of tools for diagnosing these diseases.

In turn, Professor José Jimenez reinforced the idea that the audiovisual is one of the least rigorous forms of communication, being suitable for scientific dissemination.

In her opportunity, Professor Regiane Regina talked about the scientific dissemination project at UFPR, and about the tools used by them, such as one of the boards called “Ask the Scientist”. The panel ended with professor Juciano’s lecture, who pointed out the experience of the communication process carried out during the four campaigns of the “Syphilis No” project.

The 3rd CIIS is being broadcast live in the G1 portal, through the link: https://g1.globo.com/rn/rio-grande-do-norte/ao-vivo/ao-vivo-3-conferencia-internacional-de-inovacao-em-saude.ghtml.